Drones are increasingly common in today’s time. And so authorities are seeking a sort of “balance” between personal rights and security to leave satisfied all parties. But what at first seems to be a civil problem, now receives a military solution. All thanks to the system Skywall 100. It’s a  bazooka equipped with a smart look. The main objective of it is to capture drones in the air. It does so using a network, and “demolish” safely by parachute into their shells. 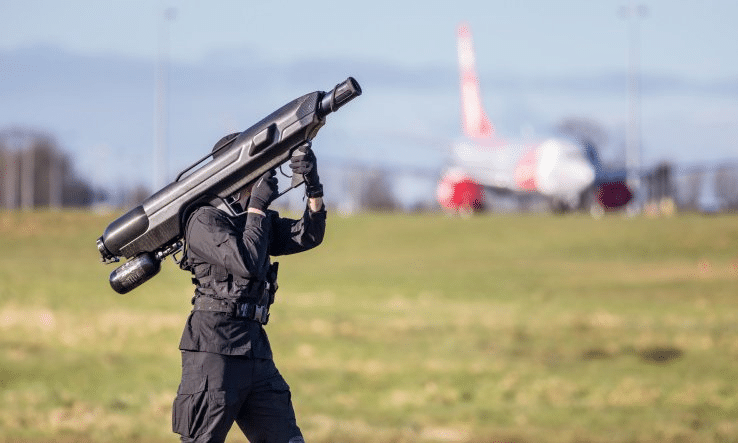 The drone is a perfectly valid form of entertainment. But as with other options, requires a certain degree of responsibility that many of its pilots choose to ignore. At the same time, there have been several incidents with malicious intent. Like the “visit” of a drone loaded with radioactive elements to the office of Japanese Prime Minister in April last year. These incidents had initiated a series of projects such as drones to hunt other drones and eagles trained for the same purpose. What we have here today is a more advanced vision in capturing drones. Moreover, I say ‘very American’, were it not for the fact that its origin is actually the UK: The Skywall 100 bazooka.

In essence, the bazooka Skywall 100 fires a special ammunition equipped with a network to neutralize the drone. Then it uses aa parachute that enables a controlled both the drone itself and the capsule that guards the net decline. The presence of such parachute solves two fundamental problems in the ‘traditional’ interception of drones. One is the idea to get the perfect projectile and the other is to destroy it so that forensic processing is impaired. Bazooka also has a smart look that assists the user at the time of the shooting, calculating factors such as distance vector and drone.

The launcher based on gas Skywall 100 allows its missile intercept drones at a distance of a hundred meters. Its fast charging system gives the user the possibility to shoot down several drones in a short time. Its developer, OpenWorks Engineering has not yet released the price of the bazooka but confirmed the launch of a semi-permanent, the Skywall 200 version (using a tripod) and Skywall 300 format turret. The product will be available before year end.