Skip to content
home Technology ARM Cortex-A32 is a new brain to wearables, Internet of things and devices like Raspberry

ARM continues to give the design ready to chip makers, creating processors on its architecture, increasingly specialized in what kind of gadgets they’ll use. Its latest venture is all connected devices, which are within this new wave called Internet of Things .

It is a very important industry announcement, perhaps less for the general public, but we’d like to introduce Cortex-A32, a small brain for many things. We get bored of hearing its name from now on, since its purpose is to make smarter and efficient wearables, new home devices, also devices like Raspberry .

It is known that ARM has a market share of 70% in this business of “embedded” processor, so called because initially be designed to perform one or a few dedicated functions, but increasingly are more capable. That is why the British company should be retained in the forefront, offering what the industry demands. 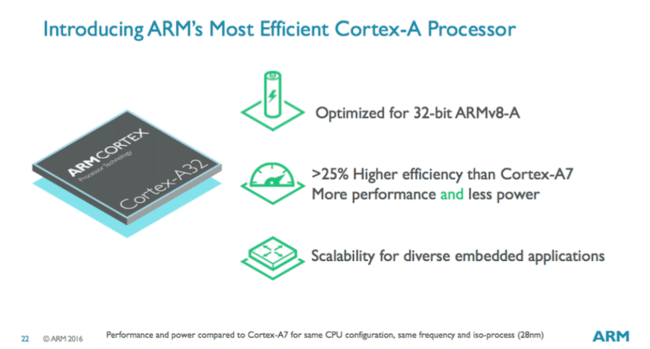 ARM Cortex-A32 is really the core design that will use processors who choose. Has a size particularly small, is much more energy efficient, and for which you like to go into more detail, discuss using a set of instructions ARM v 8-A.

It is the logical relay other designs known as ARM Cortex-A7 and A5 , which gains in performance – 25% faster – thanks to modern instruction set. Interestingly, there seeking efficiency and price stays at 32 bits.

A model Cortex-A35 offering 64 bits but larger efficiency and does not so desirable when designing processors for minimum gadgets. To position ourselves better, ARM is best known for its cutting edge designs for smartphones, such as the Cortex-A72 and A57 in high-end, or A53 in the middle.